Once upon a time there was a cute little round sweet lollypop on a stick called Chupa Chup. Chupa Chup was invented in 1958 by Enric from Spain. The name comes from the Spanish verb chupar, which means ‘to suck‘. But how did Enric come up with the idea of a lollypop on stick? Quite simple, actually.

After seing a (his?) mother cursing as her child got sticky hands from melting sweets, he came up with the idea to put the sweets on a stick. And that’s not the only idea he had! He was convinced that the placement of sweets in the store didn’t reflect their selling potential so he decided to place his lollypops right next to the cash register within reach of children’s hands. While waiting in line for mommy to pay for groceries every child wished for a lollypop on stick. As the price was quite cheap (1 pesseta at the time, which is about 0.006 € at this time) the success of the Chupa Chups was guaranteed. In 1969 the Chupa Chups logo was designed by the famous Spanish surrealist Salvador Dalí. A breathtaking and sexually provocative / disturbing artist who actually named one of his masterpieces ‘The Great Masturbator‘. He designed the Chupa Chups logo in addition to facilitating the design of the advertising campaign for the 1969 Eurovision Song Contest and creating a large on-stage metal sculpture that stood at the Teatro Real in Madrid. [Source]

Chupa Chup’s first marketing campaign was the logo with the slogan ‘És rodó i dura molt, Chupa Chups’, which translates from Catalan as ‘It’s round and long-lasting‘. Later, celebrities like Madonna were hired to advertise. In the 1980s, owing to falling birth rates, an anti-smoking slogan ‘Smoke Chupa Chups’ was tried to attract further adult consumers.

In around 2008 Chupa Chups launched a campaign including a mascot called Chuck. Chuck was CC’s first global mascot with an expressionless staring face, two fingerless hands and two legs, wearing a grey T-shirt and blue trousers (jeans?). Trying to appeal to teenagers they’ve decided to go with the slogan ‘Life less serious‘ and made this character less determinable (f.e. not giving him a voice – which makes it appealing to a wider audience [like Hello Kitty with no mouth] or making him unpretty and kind of goofy which also appeals to a wider audience).

They launched a series of ad campaigns which surely applies to a teenage audience insted of the preschool and kids’ population.

Response to the campaign around the world has included teenagers in Italy creating their own videos and uploading them to YouTube to be seen alongside the television commercials. SpotTube2008 received over 20,000 views of one of the films in one day. Another creator, DonSImoCorleone, uploaded the films to YouTube as well as posting still images on his design profile at Deviantart.com. Chuck Fan Clubs have been started on onine forums and social networking sites such as Facebook. Kanye West’s official blog even included a mention. [Source]

Chuck and Chupa indeed got plenty of media attention despite the fact that they’ve lived a half of a century without a mascot and then released a weird one with surreal, maybe even Dalí-like elements.

And the shape of the mascot? Well … 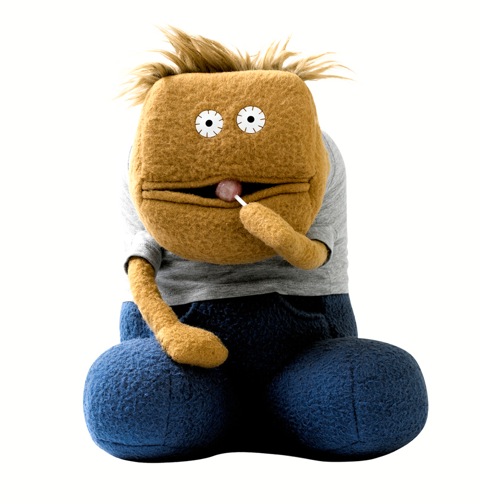 I’d love to know what you think of Chupa Chups and Chuck, especially. Feel free to express your opinion in comments, tnx